Thoughts From Another Create / Consumer

When I first came up with Create / Consume, one of the first thoughts I had was that it would be a great project to pitch to others to do themselves, since it's tremendously flexible. Lots of friends showed interest, but so far only one of them actually followed through and did the full experiment for a month.

My fellow Create / Consumer's name is Drew Tarvin. I met him a few years back at the Magnet Theater where we both perform improv every week. Drew went through his own version of C/C that was fairly similar to the one I set up for myself, tracking writing, shows, research on the one end, and internet use, TV, and leisure reading on the other. He also tracked a few "gray area" items of note (like watching improv shows).


He even went so far as to track the times of day he was most productive, something I didn't even think of: 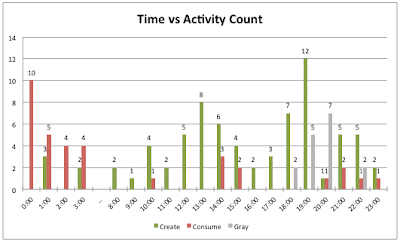 Drew's thoughts on the very successful experiment can be found on his personal blog - which you should totally go check out. I'd like to share his final thoughts on the experience here though, right now:


"So what was the biggest benefit of all this? For me it was giving me insight into how I work and keeping me honest about how I’m spending my time. By having the data in front of me, I can make strategic decisions on things I want to keep or change (such as less time on the Internet).
But perhaps the greatest thing about doing this challenge was that simply knowing I was tracking my time influenced my behavior for the better. Early on when I didn’t have much “creation time” reserved, I did less consumption because I didn’t want to tip the scales. That alone was worth implementing the system.
For those of you with creative ambitions, I recommend you give it a try. You certainly don’t have to keep as strenuous of logs, nor do you have to go into as much analysis, but it is an interesting challenge to at least try for a month."
Thanks a ton Drew for fully committing to the experiment and helping to spread the word. Create / Consume is officially a multi-person project!