Four weeks in, and less than three days to go. Create / Consume is pretty much old hat for me right now. I don't want to brag and say I've mastered this or anything, but...ok, let's look at how I did this past week: 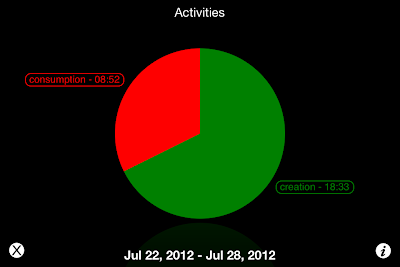 For the first time since I started, I managed to maintain a solid 2-1 ratio of creation to consumption. 18 hours, 33 minutes (68%) of creation to 8 hours and 52 minutes (32%) of consumption. I've been holding steady with about 19 hours of creation every week, and slowly reducing my consumption level overall, filling my time with creation and other forms of productivity.

Let's take a look at creation - but before I do, apologies in advance for not having more fun stuff on this or my other blog to share as a result of all the work I've done this month. I've been doing a lot of writing, but I'm cautious about sharing first drafts of things I'm working on before I feel like they're really ready. I hope to have some stuff up soon though. 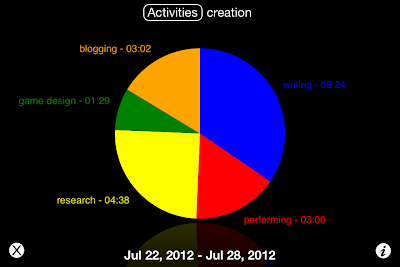 Writing and blogging took up about 50% of my creation time, as did performing, research and game design. I'm 23 pages away from finishing my 4th book of the month, which is something I'm not sure I've ever done before, even when I was back in college. Certainly not voluntarily. While this would be a very different experiment if any book I read counted as consumption, I'm satisfied with how I set things up - allowing myself an hour (at most) per day to read something instructive or otherwise relevant to my own work (like re-reading/analyzing one of David Sedaris' books, since I do a lot of short non-fiction writing) allows me to have a few more choices in terms of productivity whenever I have downtime.

Let's move on to consumption... Look at how little time I spent on the internet! Two and a half hours? That was probably an average day for me less than a month ago. And thirty eight minutes of games? That was an average bus ride home. It's pretty amazing how things have changed. And most of that television was a single Sunday marathon of Game of Thrones, and Legend of Korra with friends, two highly enjoyable series very much worth the cost.

Finally, let's take one last look at my overall ratio to date before we get the final tally on Wednesday when the full month is over: 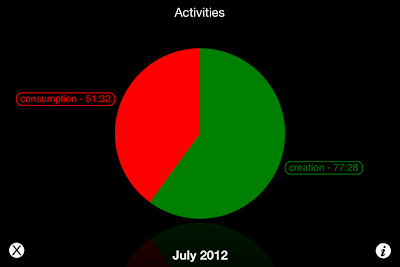 I never tracked a full month on either side before, but 77 hours of creation seems like a pretty kick-ass number. I imagine I'll hit close to 85 once the month is fully over. Maybe some other month I'll aim for 100, just for shits and giggles. And 51 hours of consumption averages to a little less than two hours a day, which is most certainly on the lower side of my past behavior.

I'll have some closing thoughts on the experiment along with a final breakdown on Wednesday. I'll also let you all know what I'll be doing going forward once the month is over. I'll give you a hint: I'm going to keep doing this. It's been such a wonderful experience, and so great at keeping me productive and responsible in a way I've never been before, it'd be silly to simply allow myself to go back to my old habits. There will be vacation days on the agenda though, specifically, next weekend, which I'll be calling the 'weekend of infinite consumption!' I'm very much looking forward to it.

Thanks everyone for reading. Anyone looking to start their own month of Create / Consume in August or anytime going forward, hit me up and let me know what you have lined up.