One day down, thirty more to go!

Care to see how my first day went? Let's check the stats, courtesy of the Eternity App for the iPhone.

I started keeping track as of 12:00pm on midnight Sunday. Naturally, as soon as my friends heard me shout: "Create / Consume has begun!" they begin attempting to force me to consume against my will. Alcohol may have been a factor here, but also my so-called "friends" really just seem to enjoy messing with me in general. So various (obviously irresistible) videos of animals fighting each other started me off on the wrong foot, and killed the dream of wanting to never go into "the red" consumption-wise. But once I woke up the next day, I got back on track and had the kind of day that the project was intended to produce...

...right after I watched an episode of Breaking Bad. And then went onto the AV Club to read a breakdown of the episode (the icing on the cake whenever I watch a show that I love). After I did all that stuff, I figured I had dug a deep enough hole that would motivate me to fill it up. I spent a solid two hours during the day working on a storytelling set for the open house storytelling mixer my improv theater has tonight, and later, after running a few errands, taking a nap and having dinner with my mom (who asked me how the project was going - thanks for taking an interest, mom!) I put another few hours into working on the card game I've been designing for the past few months, currently in it's 3rd draft.

That's pretty much the long and the short of it. So what changed immediately? Well, other than a single NY Times article and the aforementioned AV Club analyses, I spent zero time on the internet yesterday. And only ten minutes playing games, as a break during my writing. And that right there was what allowed me to allot just about two minutes of creation for every minute of consumption yesterday. Maybe I could have created just as much while still consuming far more - but then I'm sure I wouldn't have gotten as many errands done, nor would I have been able to take that sweet sweet nap.

It's not easy to remember to clock all the creation/consumption actions I've highlighted for the month, but the more I do it, the more natural it seems to start/stop the clock whenever I'm doing any of these things. I have a feeling at the end of the month, in addition to the work I complete, I'll have a nice little list of consumptions I know I clearly must love, given the price I pay for every minute I spend with them. 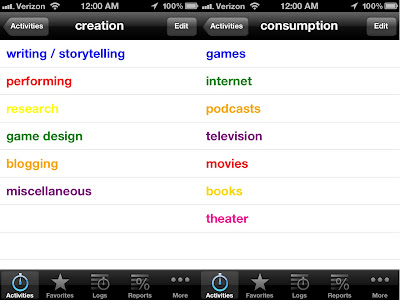