Well, would you look at that. I'm almost halfway done! So how'd I do this past week? 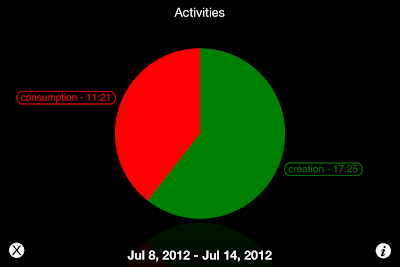 This week, I had 17 hours and 25 minutes of creation over 11 hours and 22 minutes of consumption. That's 61% over 39%, an improvement over last weeks' 57% to 43% ratio. Not bad, but if you look at last week's stats, you'll realize this is mostly due to cutting my consumption in half overall. My creation was down as well, but not as much. Clearly it's much easier to curtail a negative action than it is to consistently replace it with a positive action. Still, unlike last week, I worked a full week at my day job, and I managed to impress myself with my ability to resist temptation from my old friend the internet. I wasn't quite able to spend every free minute creating something, but I was more productive at work, which is something the graphs aren't tracking. 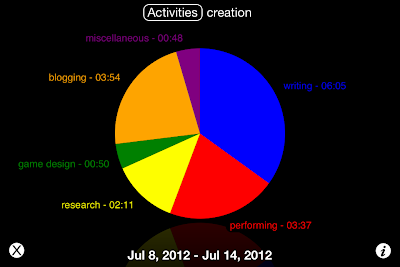 I managed to get a lot more writing done this past week, which is great. Sadly, I don't have much to share with you here at the moment. I came up with a horror movie idea at work one day, and spent my lunch break recording a video explaining the plot and the idea behind it (this is all the "misc." you see for the first time on the chart). I was actually about to upload it onto the blog, but I showed it to a friend first - a fellow writer - and she was so in love with the idea that she told me to hold off on sharing it for now in case we want to actually follow up and write the script for it together. That's a flattering response if I've ever heard one. 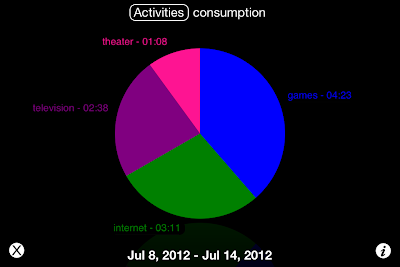 I didn't have any Louie or Breaking Bad marathons this past week, which certainly helped on the consumption side. Just a few episodes of Game of Thrones with friends. My consumption could have been below 10 hours for the week, which would have been really impressive to me, but after a four hour writing session yesterday, and no other plans for the night, I opted to turn on my Xbox and play a game on it for the first time in a while (the game was The Walking Dead adventure game by the way, and it's pretty great - I played through the entire first episode and immediately downloaded the next one).

I think breaks are important, as are rewards for a hard day's work. That's why my goal will never be a consumption of zero - it's neither realistic, nor is it a valuable benchmark in my opinion.

Finally, let's go back and look at the full month overall, with both weeks (plus an episode of Mad Men from this morning) added up: 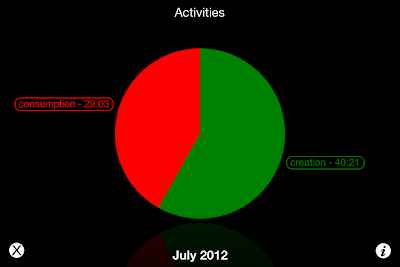 I'm still maintaining a nice healthy lead overall. If I can do as well with curbing consumption as I have this past week, the experiment will be a guaranteed success. Combine that with a solid push towards creating more than I perhaps feel normally inclined to (and a few less naps perhaps, something I've noticed I'll do as a 'legal' form creation-avoidance), and I'll be thoroughly satisfied.

So that's the update. Thanks again for reading. Those of you who have joined me, how is the experiment going for you so far? Did you know that, according to research on the topic, the two values you should keep in mind when trying to achieve your goals are the ambitiousness (aim high) and the vagueness (don't focus on a number) of what you're aiming for. Do you think Creation / Consume falls under those two categories? I'm inclined to think so, but this is my baby, so I'll be the first to admit there may be a bias at play.