Week three is officially behind me, and I now have less than ten days to go! I'm excited, in case you guys can't tell. So how'd I do during week #3 of Create / Consume? Let's take a look: 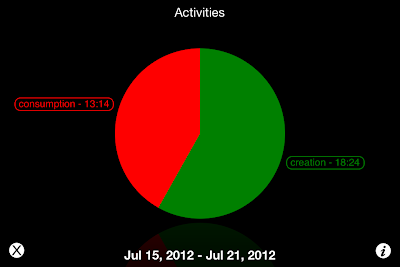 This past week I mostly held steady from the week before, creating for 18 hours and 24 minutes to 13 hours and 14 minutes of consumption, with an overall ratio of 58% to 42%. So much for my goal of a steady 2-1 creation to consumption ratio. But I still came out ahead despite devoting an entire night to waiting on line for two hours and eventually watching the nearly three hour Dark Knight Rises. And I was forced to wait on line standing up outside in the rain, thus keeping me from drawing Batman for those two hours like I had planned. Ah, well.

So what kind of creations did I make instead? Let's see: 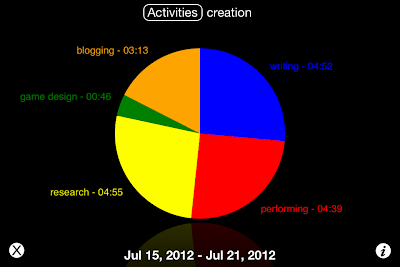 I've been working on some memoir pieces lately, and David Sedaris' books have been my bibles, since I love his style. On top of bouncing back and forth between his books and my own writing, I managed to have my usual week of improv practice and performing, posting on this blog, and getting in just a little bit more time on my card game, which I'm hoping to playtest a little later today. 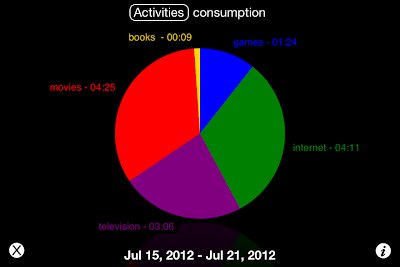 During future experiments, I think I might consider completing disallowing certain forms of consumption. I've already given up video games before, but I wonder what a week or dare I say, a month without internet would be like. Would I be able to function without facebook, twitter, and my google reader? To say nothing of my email. My money's on no, that I will, in fact, die over the course of the trial. But I suppose there's only one way to find out.

Finally, let's look at the month stats to date: 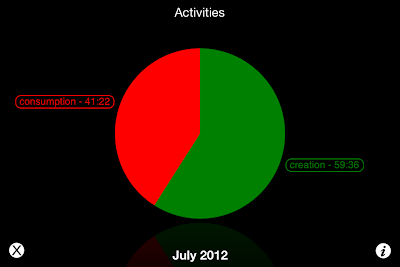 I've got almost twenty hours of creation over consumption at this point. Given that the total number of hours to date comes to just about 100, the overall ratio is right there there in the totals - 59% to 41%. Maybe I'll celebrate on July 31st with a full day of non-stop consumption, to end the month with creation just seconds ahead of consumption. Hah, I'm sure that be fun. And even though that'd technically be within the parameters I've set for myself., I think I'd rather push myself in the other direction to see just how far ahead I can get.
That's all for now dear readers. Thanks for following along. I hope to have something fun up for you all to read in the next few days. Stay tuned!